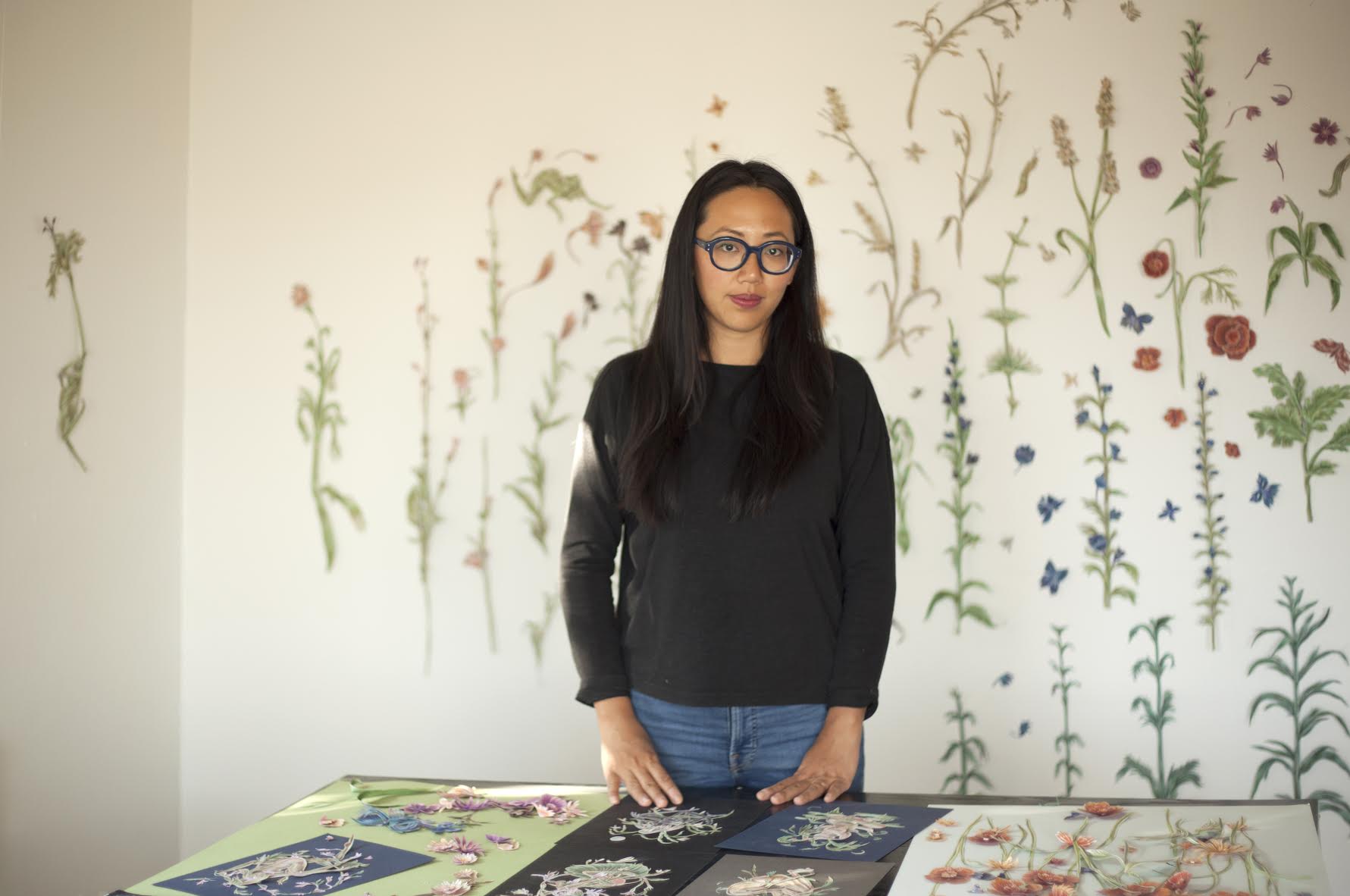 Partway through my conversation with Toronto-based artist Winnie Truong about her new exhibition of drawings, she paused to reflect, “I could give you the highest resolution photos, but you still wouldn’t see the tactility and fragility of each individual layer, and that has nothing to do with the exhibition. It’s just that real life is superior.” The concept of “real life” feels especially weighted. We spoke in the midst of a pandemic that has closed physical public galleries for the foreseeable future, calling for spaces like Mirror Mirror Gallery to exist. But also, we are living through a decisive moment of mass social upheaval in response to enduring police brutality and systemic racism. When Troung created her fantastical drawings, she could not have anticipated the context in which they would be viewed, and how much the notion of “real life” would be changing before our eyes.

Our collective consciousness is shifting. Truong’s visionary exhibition, Wimmin Who Wander, provides viewers with the opportunity to pause, reflect, and contemplate alternative realities. Her work offers space to “anyone who is discontent with what’s happening out there in terms of environmental destruction and social injustices.”

“As a woman, who's an artist, and a woman of colour, it seems to me that drawing is this liminal space to begin to create my own way in the art world.”

The title of Truong’s exhibition points to her use of the inclusive term “wimmin” to describe all women-identifying beings. “Wimmin” deliberately excludes the word “men”, reinforcing the power of wimmin to stand apart and on their own. Truong explained that the wimmin in her drawings are creatures “born out of foliage, and in a way, they are also birthing their own environments. You can’t really see where the florals and tendrils begin or end.” ‍

‍Wimmin Who Wander features two series that depict wimmin of different shapes, colours, and sizes. The first, Diorama, includes eight intricate 3D works that are composed of multiple layers of cut paper. She describes them as “otherworldly containers, sort of snapshots into a world of these wimmin creatures’ own making, that are suspended just outside of our reality.” She continues, “The foliage meanders in and out of these different depths of the shadow box containers.” While we may see these mythical creatures as trapped within their frames, the creatures themselves are not bothered. In actuality, it is us, the viewers, who want inside their idyllic worlds.

Truong’s second series, Studies, includes five works that she describes as “complicated sketches”. She uses these sketches of beautiful and transgressive wimmin, each delicately intertwined with diverse flora, to work out ideas for her larger pieces. “For me, as someone who works super-obsessively and meticulously, they are smaller, intimate and simpler ways of articulating a lot of similar ideas. Studies to me are very literal, but they stand on their own as complete works.”

What is especially striking about Truong’s drawings is that the wimmin are turned away from, and unconcerned by the viewer. Truong describes how, “in their act of defiance, they are undoing the traditional gaze. The wandering wimmin are experiencing what is sublime in nature and what is before them.” She notes that a piece like Midnight Hatchery echoes Jean-Honoré Fragonard’s Rococo painting, The Swing. “It is very sensual and very titillating, but it’s also very male-gazey. My work is the reversal. Here we have this spooky spider-woman who is doing a moon salute on her own terms.”

Truong grew up in Toronto and graduated from OCAD University. It was here that she took an advanced drawing class with Luke Painter, who, after seeing sketches she had made as preliminary work, encouraged her to explore the medium of drawing more seriously. But she has been drawing since she was a child. “Because drawing is such an accessible tool, it’s something that has always been around. I would go to my grandmother’s house and be bored out of my mind, and my parents would give me a stack of lined paper - 500 pages of Hilroy - and a ballpoint pen, and then I would have at it. So, it’s always been the way for me to express myself.”

“So, it may be very pertinent now to see these very femme, very natural spaces represented in the work, when everything feels so hard and difficult.”

Truong’s drawings employ hand-drawn coloured pencil, pastel and cut-paper collage. For the past decade she has almost exclusively worked with coloured pencil. “I have always been interested in the ability for such a simple and accessible and seemingly juvenile tool to create big and dense concepts.” Historically, drawing has been used by artists as preparatory work for paintings and sculptures, and is often overlooked as an art form in its own right. Truong is interested in “creating large-scale works on paper that are monumental and can be seen in the same conversation as painting and sculpture.”

For Truong, drawing, or, as she calls it, mark-making, is an act of defiance. “As a woman, who's an artist, and a woman of colour, it seems to me that drawing is this liminal space to begin to create my own way in the art world. And to create works that exist outside of the canon and deal with themes that touch upon bigger feelings and experiences of wimmin in a different way that’s not rooted in the western art canon.”

When I asked her what she hopes people will take away from her exhibition, she replied, “Some sort of escape. For me the work I do, especially recently, is a lot about reimagining these environments that exist just outside of our understanding. So, it may be very pertinent now to see these very femme, very natural spaces represented in the work, when everything feels so hard and difficult.”

While we can take comfort in Truong’s bewitching drawings, they also provide a sharp reminder of just how interconnected wimmin are to our bodies, to each other, and to the earth. All of us can look to art to question if we want to maintain the status quo, or, if we want to deepen our collective imagination and foster a world that is peaceful, just, and inclusive for all.